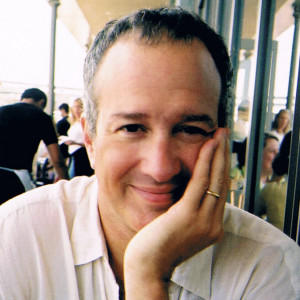 We were so lucky that the wonderful illustrator and author, Jon Agee, travelled all the way from San Francisco to spend an hour talking to 400 children from Ipswich primary schools about his work. Laughter filled the auditorium at the New Wolsey Theatre as Jon told children some of his stories while simultaneously drawing fun and fast pictures to illustrate the action. Jon also read from his latest titles The Wall in the Middle of the Book, and Life on Mars and explained to everyone how he conceived the ideas and showed his preliminary sketches. It was an inspiring and joyful event which kept both teachers and pupils enthralled.

We really hope he'll come back to the UK next year!

Jon also visited four Ipswich schools, working with groups of children in the classroom on their illustration techniques. Every child taking part in a workshop received their own book to take home and keep.

Jon Agee is the well known author and illustrator of over 30 picture books including Terrific, Milo’s Hat Trick and most recently the acclaimed, The Wall in the Middle of the Book. He grew up in Nyack, New York, just up the street from the Hudson River. As a child he always had an art project on the go. He made picture books, comics, and – as a ten-year old, living in England – flip-books out of London tube ticket stubs. His fascination with language led to a slew of wordplay books, including four collections of palindromes, most notably: Go Hang a Salami! I’m a Lasagna Hog!

Praise for The Wall in the Middle of the Book

This picturebook from the launch list of Scallywag Press demonstrates how much can be done with few words and simple pictures… The book also has a wider resonance: about demonising strangers, preconceived ideas and the folly of a wall.

Find out more about Jon Agee