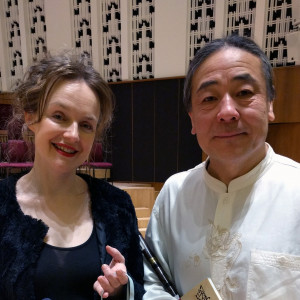 The Marina Theatre in Lowestoft was packed with over 700 children and their teachers from 8 primary schools from the surrounding area. The hubbub of the children died down as the performance began with the soaring notes of Yue’s bamboo flute filling the auditorium. Clare spoke to the children about Chinese history and showed lots of beautiful artefacts, like tiny shoes, beautiful silk clothes and a bamboo bird cage. Her readings from their book Little Leap Forward and Yue’s retelling of his childhood were fascinating and brought the story to life. A truly inspiring morning ended with more of Yue’s delightful flute playing.

What we loved about the show: it broadened the children's understanding of different cultures; the music in the performance was amazing; each child got a copy of the book to take home to read.

Four schools were visited by Clare and Yue who ran creative workshops where the children learned more about Chinese history and made their own paper kites. Every child in the audience received a copy of Little Leap Forward to take home and keep.