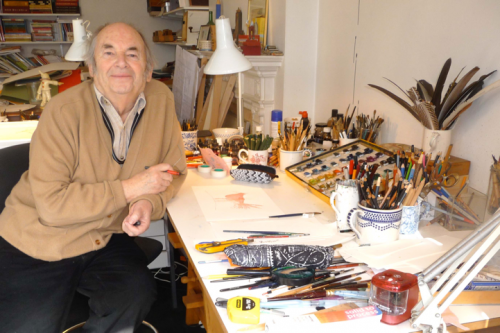 Born in Sidcup, Kent on 16 December 1932, Quentin Blake is without doubt Britain’s best-known illustrator. He’s internationally cherished by all generations and probably best known for his collaboration with Roald Dahl.

Sir Quentin, knighted in 2013, has illustrated hundreds and hundreds of books, too many to name here but including Matilda, Charlie and the Chocolate Factory, Danny, The Champion of the World, Michael Rosen’s Sad Book, A Christmas Carol, On Angel Wings. He has also created many of his own picture books including the Mrs Armitage series, Mister Magnolia, The Green Ship, Zagazoo, Angelica Sprocket’s Pockets, and Simpkin.

He became the first ever Children’s Laureate in 1999-2001. Quentin draws from the imagination - his drawings mostly feature flying, swimming or weightlessness of some kind. There are birds, angels, vehicles, boats and sometimes horses in flight. The birds can often be seen behaving like people.

Quentin Blake has been part of the Children’s Bookshow since our first show in 2003 and has since performed in 2006, 2010, 2011 and generously continues to support us.

Blake is beyond brilliant. He is anarchic, moral, infinitely subversive, sometimes vicious, socially acute, sparse when he has to be, exuberantly lavish in the details when he feels like it... I've never met a child who didn't love Quentin Blake.