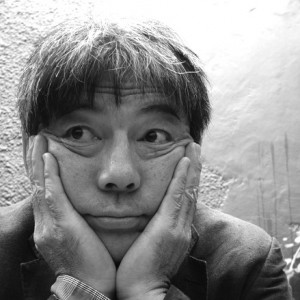 The newly refurbished Warwick Arts Centre was alive with the buzz of over 550 primary school children and their teachers ready to see Satoshi Kitamura, who had travelled all the way from Japan. Schools came from the local Coventry area, but also travelled from further afield, with groups coming from Northampton and Worcester. Satoshi rewarded the audience with a special story that he had written especially for the Bookshow about where his ideas come from, a shadow guessing game, and then an extensive session of live drawing. The audience shouted out their requests and Satoshi drew dinosaurs, giraffes driving cars, unicorns, clowns, dogs and a whole menagerie of other creatures.

After the performance Satoshi signed books for some of the children, including a little picture alongside his signature.

Born in Tokyo in 1956, from a young age Satoshi Kitamura enjoyed reading comics and illustrated novels. He started his career working in advertising as an artist, and soon made his way to London where he lived for over 20 years. His work includes over 20 of his own books, including the wonderfully imaginative Millie’s Marvellous Hat, and he has contributed as an illustrator to countless more. He translates all of his own work into Japanese and has also translated other authors’ books including the well-known Elmer the Elephant series by David McKee.

Kitamura is one of the world’s most original and stylish children’s illustrators.

Find out more about Satoshi Kitamura