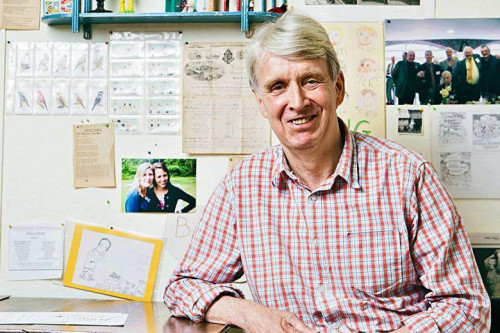 Allan Ahlberg is one of our most loved children’s writers with books for babies, toddlers and chapter books to his name. The writer-illustrator partnership he formed with his late wife, Janet Ahlberg produced many household favourites. Allan’s gentle writing style, sense of fun and often rhythmic quality make them wonderful to read out loud.

Born in Croydon in 1938 Allan was adopted as a baby and raised in the West Midlands. He worked as a postman, a grave digger and a teacher before becoming a writer and has published over 100 children’s books together with his late wife Janet. Each Peach Pear Plum, The Jolly Postman were both winners of the Kate Greenaway Medal. Other books include Funny Bones, The Pencil and The Runaway Dinner (both illustrated by fellow Children’s Bookshow performer Bruce Ingman), Cops and Robbers, Woof, Burglar Bill, The Giant Baby, The Baby’s Catalogue, and Peepo.

Surely no one - baby, child or adult - could fail to enjoy Peepo!